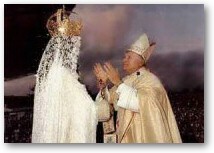 you will be blessed with numerous facts as well as links you can share with your Catholic friends as to the open and evident acts of "Mary Worship" that the Church of Rome teaches its flock. Please understand this information and all the information on this website has  been compiled as a tool to help herald the three Angels message to those still trapped within the grasp of Rome. Please also understand that not only Catholics are trapped in the Roman grasp. For all those that embrace the inventions of Rome are in danger of eternal damnation as well.

"Membership in the Militia means complete dedication to the Kingdom of God and to the salvation of souls through Mary Immaculate." -Pope John Paul II 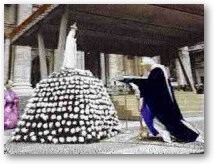 "We have an advocate in Mary that the father, Son, and Holy Spirit cannot say no to. It is impossible for them to say no to her! -Fr. Stephan Scheier

Pope John Paull II has 'dedicated himself and his Pontificate to Our Lady.' He bears the letter "M" for Mary in his coat of arms. And his personal motto, which is embroidered on the side of his robes in Latin is the following: "TOTUS TUUS SUM MARIA", which in English translates to: "MARY, I'M ALL YOURS."

For those that think the "Totus Tuus Sum Maria" is a fictitious proclamation of Pope John Paul II, see this excerpt from a Los Angeles Times News Article.

"By awarding the Virgin a central place in the cathedral's narrative, the archdiocese is keeping faith with a long, if fluctuating, Catholic and Orthodox tradition of devotion to Our Lady, a tradition enjoying a resurgence under Pope John Paul II. (The pope's personal motto, "Totus tuus sum, Maria," or "I am all yours, Mary," reflects his belief that the Virgin intervened to save his life from an assassin's bullet in 1981 so that he could help defeat European communism.)" -LATIMES.com Sept 1, 2002 By

I got this pic off the Vatican website. Notice the huge letter "M" signifying John Paul II's desire to glorify MARY as his god in his pontificate.

The following table compares the Mary of Roman Catholic theology and religious practice with the Biblical portrayal of Mary and with the goddess which is worshipped by Wiccans and modern pagans. My information about Wicca comes from the book "Wicca: Satan's Little White Lie" by Bill Schnoebelen (who was the high priest of a Wiccan coven before he became a Christian), the "World Book," the on-line version of "The Encyclopedia Brittanica," and numerous web sites.

Roman Catholic Cardinal Gibbons said...
"Do you ask me, is Mary willing to assist you? Does she really take an  interest in your welfare? Or is she so much absorbed by the fruitation of God as to  be indifferent to our miseries? "Can a woman forget her infant so as not to have pity on the fruit of her womb"? (Isaiah 49:15), Even so Mary will not forget us" "Faith of our Fathers, By Cardinal James Gibbons, Archbishop of  Baltimore, page 225, 1893 edition.

"Can a woman forget her sucking child, that she should not have compassion on the son of her womb? YEA, they may forget, Yet I will not forget thee" Isaiah 49:15

A Roman Catholic Cardinal openly twists the Word of God why? Because he knows that if he plays the odds right MOST Catholics won't open their Bibles to verify what he said. They are taught not to open Bibles and if they do they are taught not to trust them. Proof? click here

It states this in Genesis 3:15, "And I will put enmity between thee and the woman, and between thy seed and her seed; it shall bruise thy head, and thou shalt bruise his heel."

For literally centuries the Vatican has declared that Mary the mother of Jesus is the "woman" in this passage. But according to Isaiah 28:9-10, "Whom shall he teach knowledge? and whom shall he make to understand doctrine? them that are weaned from the milk, and drawn from the breasts. For precept must be upon precept, precept upon precept; line upon line, line upon line; here a little, and there a little:"

Nowhere in Scripture do we see the Vatican's claim that the woman in Genesis 3:15 is Mary. In fact, when you ask them they cannot give Scripture, but as the politicians they are they double talk their way out of the argument. Or at least they try and the only ones believing them are those that don't read Bibles. How do I know this? When you do the study as Isaiah suggests when finding doctrine you discover the following.

In prophecy, a woman is defined as a church...

As is obvious, the woman in Scripture and especially when it comes to prophetic symbols,and Genesis 3:15 is most assuredly a prophetic statement of our Lord, this means the woman is in fact the obedient church. Now notice this. As Paul is talking to the churches he stated the following.

Sometimes it's just that easy to see the truth and expose the lie. Problem is, most Catholic refuse to open Bibles and so this truth will never come to them until it is way too late. Because as also prophesied, when the judgment of hellfire falls EVERYONE in the flames will have their self-deception wiped away. That's right, ALL of them lied to themselves and made all sorts of excuses as to why it was ok to stay in the Roman Catholic church even though those coming to warn them had truth THEY KNEW was truth when presented.

VIDEO Pope Franics worships Mary on camera
NOTICE in this video how the Catholic church made statues of people WORSHIPING Mary (NOTE 0:25 in the video)
Pope on New Year’s Day: Devotion to Mary is a must
Pope Francis: Where Mary is, ‘the devil does not enter’
VIDEO: Pope worships and actually prays to a statue on camera
Nun receives death threats for suggesting Mary was not a virgin

‘Pope’ Prays in Observance of Catholic Belief Mary Was Conceived Sinless: ‘You Free Us From Stain of Sin’

VIDEO Statue of Mary "sent" to Syria as if it's alive to "support" the people?!

"We pray to Mary because her prayers are the most powerful"

VIDEO Pope and many followers worship Mary on camera

VIDEO:Sanctuaries of Fatima and Aparecida will jointly celebrate their anniversaries in 2017

VIDEO:Our Lady of Fatima and Her Universal Devotion

VIDEO:Benedict XVI welcomes statue of Our Lady of Fatima to his home

Pope to attend Marian Day in the Vatican

VIDEO: Pope Francis plans to consecrate the world to Our Lady

Mary, protectress of the universal church

Pope entrust Benin to “Our lady of Africa”

VIDEO: Pope Francis prays before Our Lady of Lourdes at the Vatican

Mary as “co-redemptrix” with Jesus

Pope urges us to imitate Mary

Pope Benedict XVI: Mary shows us the path of the alliance between man and God

Pope Bededict XVI: Mary is the model humanity should base itself on

Pope highlights Mary's role as 'woman of the apocalypse'

We entrust Asia to Mary

Rosary is both simple and profound says Pope

In Depth: Seeing the Virgin Mary

Mary, the woman who called 'Jesus my Son."

The Queen of this holy land

Mary lived with her eyes fixed on her Son

POPE CONSECRATES THIRD MILLENNIUM TO OUR LADY OF FATIMA

Our Lady of Fatima on her way to China

John Paul Entrust 3rd Millenium to "Our Lady of Fatima"

Jubilee Pilgrimage culminates in Mass at Church of the Holy Sepulchre

John Paul to entrust Third Millenium to Our Lady of Fatima

Filipino Muslims, Christians can call on Mary for Peace

THE FOUNDATION OF MARY'S HOLINESS WAS HER HUMILITY

Mary brings light and hope to all people

PRAYER OF ENTRUSTMENT TO THE VIRGIN MARY

STATUE OF THE VIRGIN OF FATIMA ARRIVING IN ROME

MARY IS AN OPEN WINDOW TO THE MYSTERY OF THE TRINITY

VIRGIN OF GUADALUPE TRAVELS 23,000 KILOMETERS "ON FOOT" IN AMERICAS

All Hail Mary, Thou Heaven-born maid

Mary has appeal for other Religions

John Paul II says he owes his life to Mary

Mary references in the Qu ran

Mary: A guide in faith, a sign in hope, an example of love

To be a saint: The blueprint for every Christian

Virgin Mary: Would proclaiming her 'co-redeemer' be a promotion?

Mary, eschatological icon of the church

The assumption of Mary

Homage to Mary at Vatican city

Virgin Mary Seen as a Model for All Muslims

The ultimate doctrines of devils... A demon speaks as Mary

The Biblical Truth about death that proves the apparitions a lie

Salvation is obtained from... Mary?

WORSHIP OF THE VIRGIN MARY HAS A JESUIT BASIS

Mary Worship under the Microscope!

Entrusting the World and the Third Millennium to Mary

Overview of Documents regarding the tradition about Mary Priest

Is the Virgin Mary Dead or Alive

Mary as described at Fatima

Our Lady of Lourdes

Mary and the baby Jesus

Mary Queen of the World

Our Lady of Mt. Carmel